In this report, we’ll be taking a look at the far North East of England, including Yorkshire and the Humber.

This part of the country is known for its mix of national parks and industrial hubs. However, its rapidly expanding cities make it a potentially lucrative place for residential developers to consider.

We’ll be taking a deep dive into the demographic data and local housing market in Newcastle, Sheffield, and York¹ to indicate where potential new opportunities could lie.

¹Data is inclusive of the local authority they are situated in, not just the city 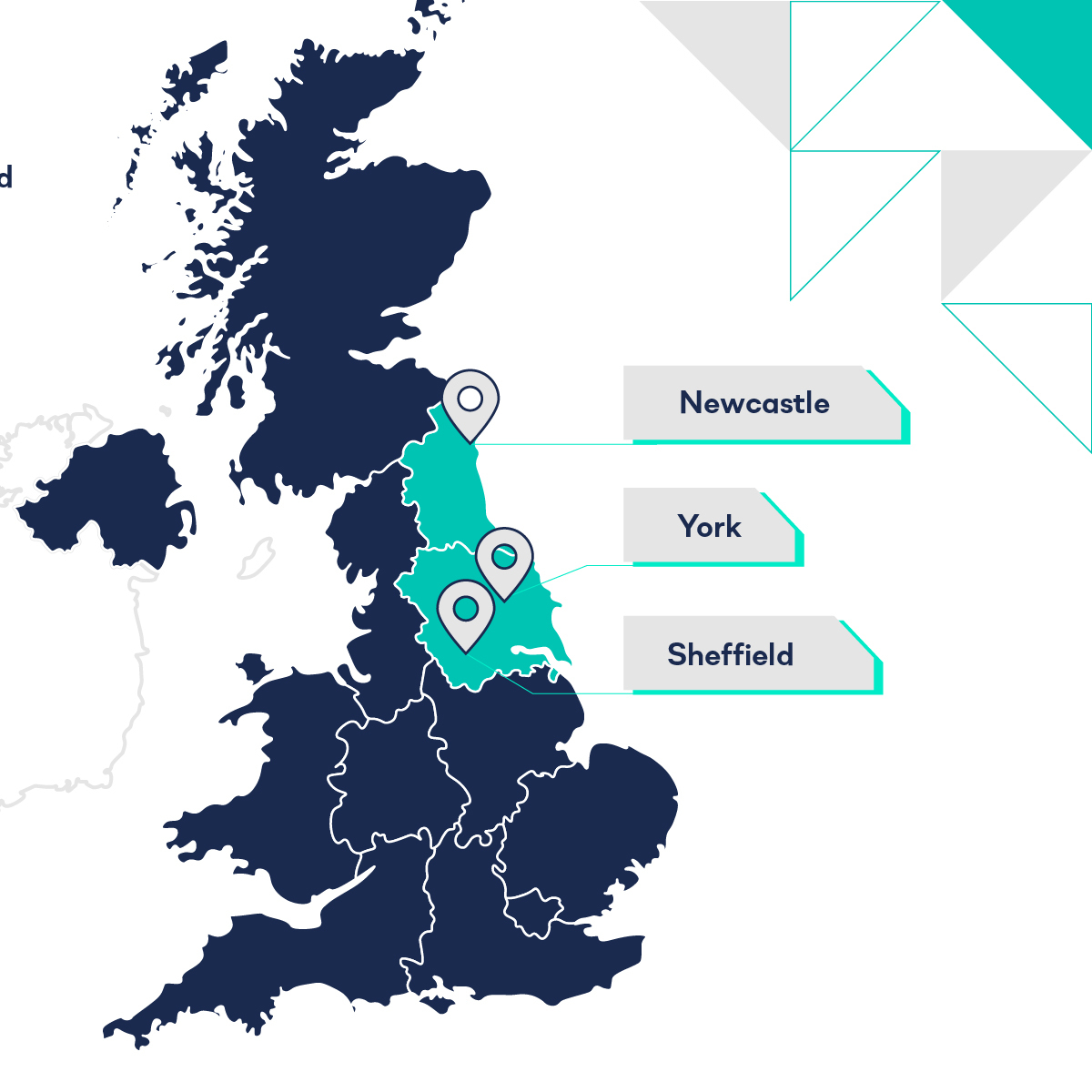 Demographic data is useful to inform what type of housing should be built where, so you can best cater to demand.

Knowing the age, income and population density of a certain area can help you decide on the location, pricing, and style of your development.

Local population and area size are useful to help calculate the potential level of demand in your target region – and help figure out the type of housing that could work best there.

When choosing the type of properties to build, developers should factor this high population density into the equation. Blocks of flats could be a better choice when considering space constraints.

Sheffield has both the largest area (368 sq km) and population (589,214), meaning that despite the high volumes of people, they are likely to be significantly more spread out than they are in Newcastle.

York has the smallest population out of the three cities we’re looking at in this report, with a population density of 776 people per sq km.

Sheffield also had the highest positive net international migration at +5,781 which is understandable as they have the largest population so more inflow and outflow are expected.

More people already based in the UK were moving out of the local authority areas than into them, but there was a higher level of people moving from overseas than emigrating.

The pandemic is likely the cause of more people leaving the city to seek bigger homes in the suburbs and more green spaces. However, British cities are still appealing to those moving from overseas as they are important hubs for education and employment.

Age is another important part of the puzzle when trying to get a full picture of the demographics in your target area.

A younger demographic means that they are less likely to already own a home, so a focus on Build to Rent (BTR) or affordable first homes could be a lucrative move. On the other hand, an older demographic could mean a greater demand for larger family homes or developments suitable for senior living.

Newcastle has the youngest median age at 32.1 – likely due to the high proportion of students and being one of the largest economic hubs in the region.

York is on the other end of the scale with the highest median age (37.6), which is reflected in the higher house prices we’ll see later in the report.

Sheffield falls in the middle and has a median age of 35.3.

It’s interesting to note that all three cities sit below the regional average of Yorkshire & Humber and the North East – 40.2 and 41.7 respectively. Cities tend to attract a younger demographic, which combined with the space constraints (particularly in Newcastle), smaller first-time homes in central locations are likely to be a profitable option for developers.

So far we’ve looked at how big the target market could be, where they are moving from, and how old they are. Now, it’s time to take a look at how much money they are making. This will give you a good indication of how to budget for and price your developments.

All three cities have very similar median incomes, with just over £700 difference between the highest and lowest.

Newcastle’s median income was £28,957 and above the regional average of the North East.

Sheffield has the lowest median income and is just below the regional average for Yorkshire & Humber at £28,369.

York has the highest median income of the three cities (£29,065), but only by a narrow margin. It also has significantly higher house prices than Newcastle and Sheffield, so this small income gap is quite surprising and developers could look to supply more affordable housing.

Demographic data is a solid basis for helping inform where you want to build. But researching and understanding the local housing market is the real decider.

In this section, we take a look at average house prices, new-build premiums, housing delivery targets, and the percentage of Green Belt land in each area.

This data can help narrow down your search to find the most suitable (and profitable) areas for your developments.

Out of the three cities in this report, Newcastle’s house prices were the lowest and relatively affordable compared to other regions in the UK. But they are still quite high for the North East as a region.

However, as Newcastle is the largest city in the region it is to be expected that house prices will be slightly higher than average as people are likely earning more and willing to pay more to live within a central hub.

Sheffield saw the lowest price increase for the same period, with a difference of 9.6% and an average house price of £197,135. It did have the highest sales volume out of the three cities in October which can be attributed to its larger population and higher levels of migration.

So, why are homes in York so expensive to buy?

The historic city is considered an attractive place to live by many, which combined with its thriving university and central location in the country has driven up its house prices over the last decade.

There is an increasing concern that some people are being left behind by the housing boom. In 2021, York was listed tenth in a list of the least affordable cities to live in the UK if you’re on minimum wage.

Developers could look to work with Housing Associations to deliver more affordable housing within the city as it seems there’s a real need for this type of property.

Across the three cities, we can see quite a fluctuation in the price of new builds versus existing builds. This price difference is referred to as a new-build premium.

Newcastle had a new-build premium of 20.44% for 2021 – the highest out of the three cities by quite a margin. But this was actually a drop from the previous two years, as an increased supply of new builds has likely driven down the price gap.

Sheffield has also seen a drop in their new-build premium from 2019 to 2021, and now new builds are just selling for marginally more (£5.51/sqft).

York had the lowest new-build premium at -6.44%, with existing builds selling for more on average from January to July 2021. This could be due to the historic nature of some of the existing builds bringing in higher price tags.

As a whole Yorkshire and the North East have some of the highest new-build premiums in the country, so it’s worth investigating if you’re looking to make strong margins on projects outside of London.

Newcastle has consistently surpassed its housing delivery targets for the last four years. In 2019, they reached their peak before dropping down to 180% in 2021.

Considering the small area size and population density of the city, it is impressive that they can overachieve to this degree.

Newcastle has a Core Strategy and Urban Core Plan aimed to guide development up until 2030. They also have specific plans for promoting developments for demographics that can often be overlooked, such as their Specialist Housing Delivery Plan and Older Peoples Delivery Plan.

This strategic, long-term planning could be a core reason for Newcastle’s ability to consistently deliver a strong supply of new housing.

Sheffield has also achieved over target since 2018 and has been increasing steadily over the last four years, hitting 127% in 2022. These results are even after its targets were increased by 35% in 2020.

York has been seeing the opposite trend and has seen a dip over the last four years – falling from 102% in 2018 to just 65% in 2021. For housing delivery, they are one of the worst-performing local authorities in the region.

In 2019 and 2020 they were given a buffer but then were hit with presumption as a consequence of their performance in 2021. This means that York will have to come up with an Action Plan and award planning permission for housing developments unless they’re believed to be detrimental.

None of the three cities featured in this report currently have any restrictions as a result of Nutrient Neutrality, but it will be interesting to see the impact these new rules have on housing delivery for other Local Planning Authorities in the region.

Typically, the South East is seen as the epicentre of protected land, with swathes of Green belt radiating out from London. But, as we can see from the data above it’s an issue being faced the whole length of the country, and the three cities in this report are particularly impacted.

35% of land in Newcastle is protected, which although significantly lower than Sheffield and York is still quite significant when considering the already high population density and space constraints. Regardless, its consistent housing delivery indicates that this is not yet a serious blocker for development in the city.

Sheffield has 63% of all its land protected and 24.6% of this is Green Belt. As mentioned above, Sheffield’s housing supply target increased by 35% which is leading the Local Planning Authority to consider more options for the Green Belt.

One of the proposed approaches for development as part of Sheffield’s upcoming Local Plan is to build 16,000 homes in the Green Belt – freeing up 7% of it.

Developers should pay close attention to the finalised version of the Local Plan to see what the verdict is, but they could be more lenient on proposals looking to develop on Green Belt land.

York has the highest percentage of protected land out of the three cities with 82.4% of all land classified as Green Belt. This likely feeds into the high average house prices in the area – the lack of available land squeezes supply and drives up prices.

Newcastle, Sheffield, and York all hold potential development opportunities – but they aren’t without their challenges.

Newcastle has the lowest percentage of Green Belt land and high levels of delivery, indicating an appetite from the Local Planning Authority for new developments.

There’s a push to solidify the city as one of the Northern powerhouses, bringing more jobs and economic uplift to the area. This has already seen some successes in the development space, with international investment for Build to Rent properties starting to flow in. Most recently, for Hadrian’s Tower in the city centre which had 80% of units snapped by investors.

Sheffield has been pushed by their rising targets, but are still delivering a steady supply of new homes. If its Local Plan was to promote development on the Green Belt, this could open up further opportunities for developers.

York’s constrained city centre and low housing delivery could be off-putting for developers. However, as it is now under presumption it could be a good time to push through with a project that could previously have been rejected. Particularly if your development includes a high volume of affordable housing units, as this type of accommodation is much in demand in the city.

These Northern cities have been on the rise for a while now, so 2022 could be a good time to consider them as an option for your next project.

We’ll be updating this report whenever we have new data and we’ll let you know when new content is added.